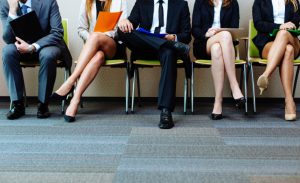 We all know what it’s like to feel nervous before a job interview. There’s nothing like realizing you have sweat stains right as you’re walking into the meeting and knowing you can’t do anything about it. Most interviewers are understanding when they see potential candidates with a case of the nerves. However, the best interviewees will work through that nervousness and show their personality and qualifications. These are the candidates most employers want to hire.

However, not everyone is cut out for the interview process. If you want to make sure you’ll throw your job interview, here are some ways to put your interviewer off of hiring you. Or, if you’d rather get the job, you can use this list to avoid some common interview mistakes.

A lack of eye contact makes you look shy or uninterested. While it can be difficult to look at your interviewer when you’re nervous, doing so can be a make or break your opportunity. Don’t feel like you have to stare down the hiring manager—that’s just creepy—but make sure you glance at them as you are talking. Doing so makes you look engaged, which is something they want you to bring to the job.

Not having a question when interviewers are done asking what they need to know makes you look uninterested in the position. Taking some time beforehand to come up with a question or two not only makes you look like you want the job, but it also helps show that you’ve done some research and thinking ahead of time. Many people fail to realize that an interview goes two ways. It’s not just a place for you to prove yourself, but it’s also an opportunity for you to make sure you want the job you’re interviewing for.

Tell Them What You Think They Want to Hear

Believe it or not, interviewers are familiar with the stereotypical interview answers. They’ve heard a thousand “I’m really hard working,” and a hundred, “I can solve any problem.” Like in good stories, you need to show them what you’re capable of, not just tell them things they’ve heard before. Answer in a truthful way that also demonstrates your capabilities without exaggerating what you can do.

Rag on Your Former Boss

Most people don’t like their boss, and now’s the time to prove how much you didn’t get along with them…not. Employers are aware that not everyone gets along, but when you openly advertise how much you fought with previous coworkers or supervisors, it shows your interviewer that you’re not willing to work towards successful working relationships. Talking bad about previous jobs makes it harder for future companies to trust you’ll behave if they hire you.

Lie About Your Qualifications

Your interviewer might not be able to tell at the time if what you’re saying is true, but if you can’t prove yourself after you get hired, you’re in for a lot of trouble. Don’t promise things you can’t deliver. It will come out sooner or later that you lied about what you can do. And as soon as it does, you can be sure you won’t be working there anymore.

Nothing screams unreliable like a failure to show up on time. Even if it’s because of something you can’t control, like traffic or car failure, interviewers are unlikely to give you a second chance if you don’t come at the agreed upon time. Give yourself 5-10 more minutes than you think you need to cover for traffic and construction delays.

No one judges by first impressions, so you can trust your interviewer won’t make conclusions about what you’re wearing, right? Well, maybe not. Almost 1/3 of hiring managers know within the first 90 seconds of your interview if they want to hire you or not. And more than half of them decide based on the way you dress and act. Clothes that don’t fit well, or seem too casual will give your interviewer the impression that you’re not reliable, and you can kiss that opportunity goodbye.

Fail to Prove Yourself

Getting an interview means you already have what it takes to get the job, you don’t need to prove it. However, interviewers like it when you give examples of the skills you claim to have. Giving specific results you have achieved in previous positions will give them an idea of what it will be like to work with you. Most of their questions are designed to give you the opportunity to show what you’re made of, and what you can bring to the position.

If you’ve gotten to the end of this article and you feel discouraged, don’t worry. Avoiding these common interview blunders and presenting yourself in a professional and honest way will take you far when trying to impress your interviewer. And if it doesn’t work out, don’t take it personally! Your perfect fit is waiting just around the corner.

wrote 29 articles on this blog.